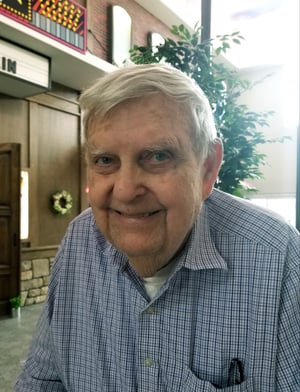 When you sit down and start talking with Bill, it feels like an overdue visit with a good friend. With his Southern drawl, playful smile, and colorful storytelling, it’s easy to see why his fellow residents and Fieldstone team members love having him around.

Bill grew up in Heflin, Alabama and worked on the family farm while attending school and playing football. He left high school for the Army, where he worked in the Signal Corps. He was stationed in Frankfurt, Germany as a young man, where he “could party for three days straight without sleeping.”

“You can put that in your story, I think that is quite an accomplishment,” mused Bill.

It was in Germany that he met his wife, Ute. “She was a feisty, young broad, and I was a feisty, young fellow; I had to get permission from the Army and her dad to marry her.” They married in Germany and had three children—two boys and one girl. They moved back to the United States, where Bill received his pilot’s license. He served two tours in Vietnam as a helicopter pilot and retired as a Chief Warrant Officer 4.

Bill loved to take his family camping and hiking, and he has done quite a bit of traveling. He worked for the Washington State Department of Social and Health Services as a data security manager and traveled all around the state for work. He and Ute retired in Arizona, where they lived until she passed away. He then moved back to Washington to be near his children. He says his proudest achievements in life are marrying his wife, having kids, and earning his “bars and wings” in the military.

He had no problem finding his niche at Fieldstone. Bill attends just about every activity, even if it’s just to “chew the fat” with folks. He likes watching history documentaries and war films, and listening to country music. His favorite activity is going on scenic bus rides. Bill raised his family in the Olympia area for over a decade, and he enjoys revisiting those places that are special to him and his family. He says the food that Chef Rich serves is exceptional, and he loves the popcorn that the Life Enrichment team makes fresh daily for residents.

While I was interviewing Bill for this feature, I told him one of the questions being asked was to describe his personality. He said, “Well, I’m mean, grouchy, ornery, and I lie a lot.” Of course, anyone who meets Bill can see that this couldn’t be further from the truth.

So if you ever find yourself at Fieldstone Olympia Memory Care, look for Bill, pull up a chair, and get ready to “chew the fat.”