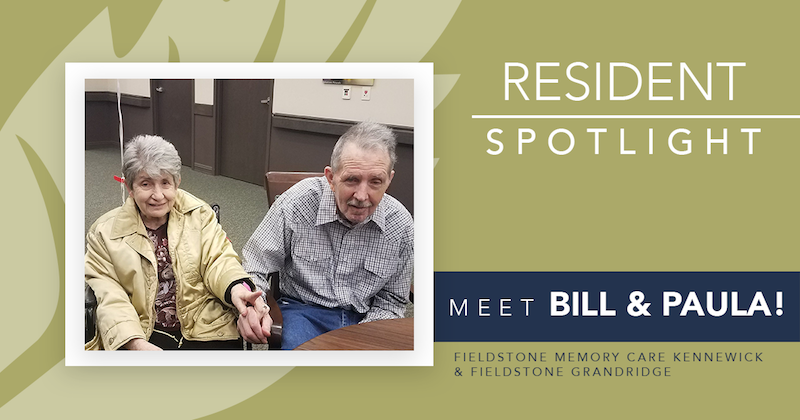 At Fieldstone, we love being able to learn about and celebrate the lives of our residents, and we are currently celebrating Bill and Paula’s 53rd Wedding Anniversary!

Bill and Paula first met at a school party when they were both in high school - she was a junior, and he was a senior. Bill was a performer in school musicals, and Paula did the makeup for the drama club, so she would put on his stage makeup, as well as the other cast members. Some of the shows Bill performed in were Oklahoma, Carousel, and a variety of Christmas productions. Many of their favorite dates were going to the movies or going dancing - they both love dancing!

Both of them attended Fresno State University in California for college. Bill studied Civil Engineering, and after graduating, he got a job in construction that put Paula through school for teaching. She taught 8th grade and several college courses.

In 1965, after four years of dating, Bill and Paula ran away to Carson City, Nevada and got married. They were a little wary when they came home, but when they did her father threw them a wedding reception to celebrate! Together they have two children – one son and one daughter.

Due to his work, Bill would travel often and Paula loved to travel with him. Throughout their marriage, they lived in Romania for 2 ½ years, China for 4 years, and Thailand for about 2 years. Although Thailand was their favorite, one of Paula’s fondest memories was while they were living in Romania: when it would snow they would get around in a horse-drawn sleigh!

Paula describes their marriage as “bliss”. They rarely fought, and Bill has been an excellent husband and companion. He was always by her side, and she would follow him anywhere.

Paula visits Bill at memory care as often as she can, especially when there is musical entertainment so they can listen to the music together.

Congratulations to Bill and Paula on celebrating over five decades of love! To read other love stories and learn more about Fieldstone, visit our blog!