Stay in the know with everything going on at Fieldstone Communities. 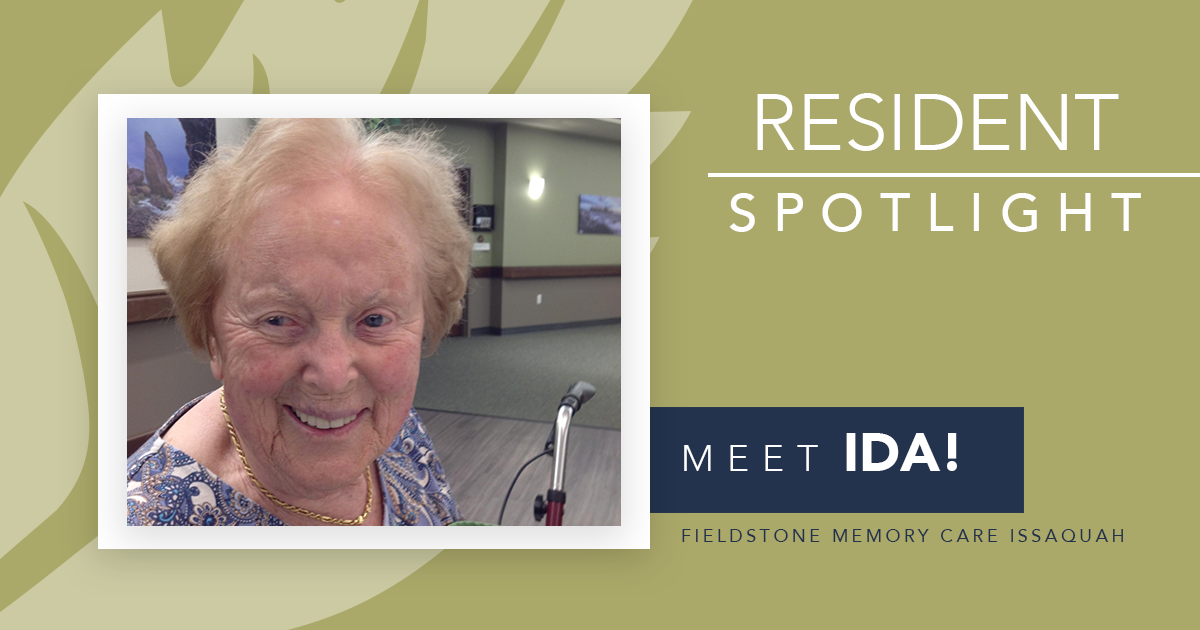 Ida is one of our newest residents living here at Fieldstone Memory Care Issaquah! She was born in Widnau, Switzerland and was one of 8 children. Out of her seven siblings, Ida, her sister Rosee (whom she claims is the family favorite) and Paulie are the only ones remaining. She and all of her siblings were raised on a dairy farm.

During her childhood, she spent most of her time riding bicycles and skiing with her family. Her family had both a ski cabin and a lake cabin where they alternated their weekends year-round. She loved spending time with her family doing activities outdoors. She was also raised in a religious environment and attended Mass every morning before school.

Ida’s sister Paulie moved to Canada when she married her husband and shortly after, in 1956, Ida followed. It was in Canada that she was introduced to her husband, Alex. Alex had also moved from Switzerland, but the two did not know each other before being introduced in Montreal. During their courtship, Alex was offered a job in Seattle working for Boeing, so the two chose to marry and start a new life in Seattle.

Before their marriage, Ida worked as a waitress and in a local grocery store, but became a stay at home mom once she married Alex. Their oldest child, Pete, was born in 1957 followed by Linda and Marieann. Ida is also grandmother to six grandchildren.

Ida continued the family tradition of skiing and spent most weekends with her husband and children at Crystal Mountain enjoying the slopes. Her family also describes Ida as having a lead foot – earning her the nickname ‘Speedy Gonzalez.' True to her nickname, Ida once received three speeding tickets in one week's worth of time on the same stretch of road!

When asked of her most significant lifetime achievement, Ida reflects back on how proud she was to become a United States citizen with her husband shortly after their move to Seattle.

At Fieldstone Memory Care, Ida LOVES to participate in exercise class every morning. While she is low-key, she loves activities and has a wicked sense of humor often providing a quiet, running commentary on each event. We recently celebrated her birthday (on Halloween!) with a special family dinner, and trip out for ice cream (chocolate is her favorite). We adore having Ida in our community and all of the personality and humor she brings to each day.

At Fieldstone Communities, we believe that it takes every single one of us - our residents, their families and friends, and our Cascadia Senior Living team - to create joyful and vibrant communities.

Fieldstone Communities invites you to stay in touch by subscribing to our Blog.